5 Things about Palm Sunday That Remind Us Christ Is King 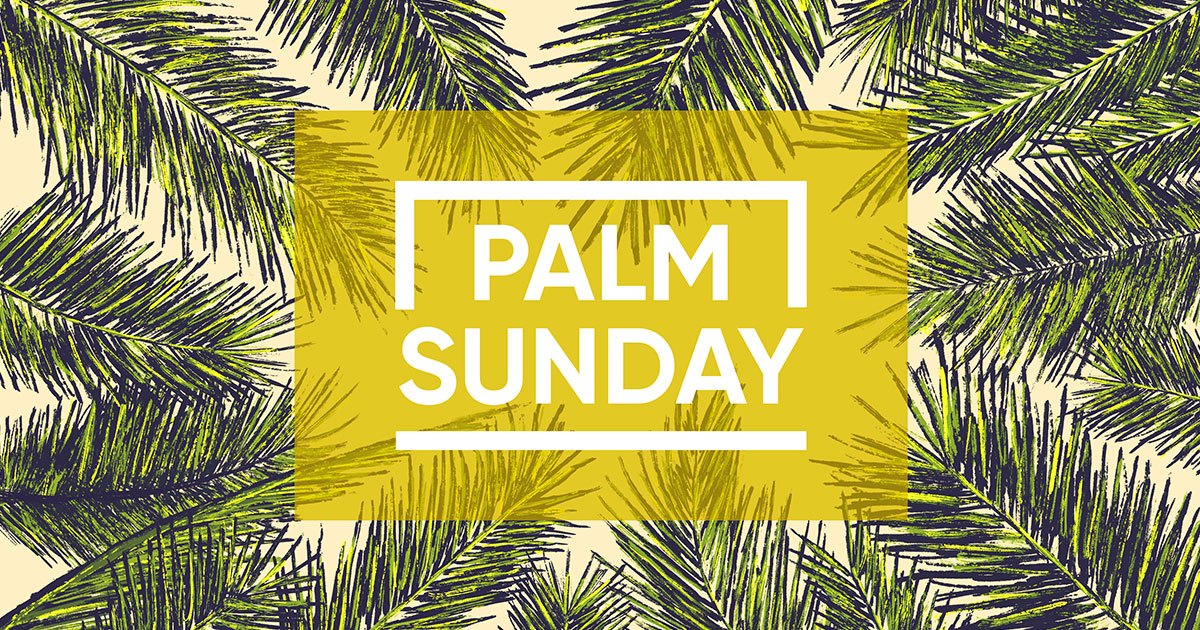 Palm Sunday is the Sunday before Easter that begins the Holy Week. It is the day that we remember and celebrate the day Jesus entered into Jerusalem as Savior and King. As Jesus rode a donkey into the town of Jerusalem a large crowd gathered and laid palm branches and their cloaks across the road, giving Jesus royal treatment.

The hundreds of people shouted “Hosanna to the Son of David! Blessed is he who comes in the name of the Lord! Hosanna in the highest heaven!”

When Is Palm Sunday?

“Many churches celebrate Palm Sunday, which is always the Sunday before Easter (see our When Is Easter? article). Maybe your church has children waving palm branches to help them connect to the story. But while this is a triumphal entry, it is Jesus’ first step toward His death.

Many of us will be celebrating Palm Sunday at home this year due to the coronavirus quarantine that has swept our nation and the globe. To help you focus on the meaning and symbolism of the holiday even in the midst of change and uncertainty, we have written 5 Ways to Celebrate Palm Sunday at Home.

Matthew 21:4 tells us: ‘This took place to fulfill what was spoken by the prophet, saying, ‘Say to the daughter of Zion, ‘Behold, your king is coming to you, humble, and mounted on a donkey, and on a colt, the foal of a beast of burden.’ *The prophecy is cited from Zechariah 9:9 and Isaiah 62:11.

Jesus had become somewhat of a celebrity among people who had heard of the miraculous raising of Lazarus from the dead, and they wanted to see Him and treat Him like a king. But Jesus wasn’t arriving to be their king on account of Lazarus; the story of Lazarus would have had the religious leaders in even more of an uproar and determined to put an end to His life, which He knew . . .  Jesus’ glory would be greater than that of a local king.” -Excerpted from When Is Palm Sunday?

As they approached Jerusalem and came to Bethphage on the Mount of Olives, Jesus sent two disciples, saying to them, “Go to the village ahead of you, and at once you will find a donkey tied there, with her colt by her. Untie them and bring them to me. If anyone says anything to you, say that the Lord needs them, and he will send them right away.” This took place to fulfill what was spoken through the prophet: “Say to Daughter Zion, ‘See, your king comes to you, gentle and riding on a donkey, and on a colt, the foal of a donkey.’ ” The disciples went and did as Jesus had instructed them. They brought the donkey and the colt and placed their cloaks on them for Jesus to sit on. A very large crowd spread their cloaks on the road, while others cut branches from the trees and spread them on the road. The crowds that went ahead of him and those that followed shouted, “Hosanna to the Son of David!” “Blessed is he who comes in the name of the Lord!”“Hosanna in the highest heaven!” When Jesus entered Jerusalem, the whole city was stirred and asked, “Who is this?” The crowds answered, “This is Jesus, the prophet from Nazareth in Galilee.”

On the heels of Palm Sunday, as we begin this Holy Week, may we constantly be reminded of its significance and value for our lives today. That very important day in history, when Jesus began His journey towards the cross.

Yet maybe in the midst of busy lives, on the heels of Spring Break, or in all of the upcoming thoughts about Easter, the real meaning of it may, even unintentionally, get missed.

His Word reveals such great truths in every part of this story. Truths that draw us closer towards Christ, reminding us that He alone is King…

5 Things about Palm Sunday that Remind Us Christ is King

1. God’s Word tells us the people cut palm branches and waved them in the air, laid them out on the ground before Jesus as He rode into the city. The palm branch represented goodness and victory and was symbolic of the final victory He would soon fulfill over death.

2. Jesus chose to ride in on a donkey, which directly fulfilled Old Testament prophecy of Zech. 9:9. In Biblical times, it was common for kings or important people to arrive by a procession riding on a donkey. The donkey symbolized peace, so those who chose to ride them showed that they came with peaceful intentions. Jesus even then reminded us that He is the Prince of Peace.

“Rejoice greatly, O daughter of Zion! Shout aloud, O daughter of Jerusalem! Behold, your king is coming to you; righteous and having salvation is he, humble and mounted on a donkey, on a colt, the foal of a donkey.” Zech. 9:9

3. When the people shouted “Hosanna!” they were hailing Christ as King. That word actually means “save now,” and though in their own minds they waited for an earthly king, God had a different way in mind of bringing true salvation to all who would trust in Him.

“If you confess with your mouth that Jesus is Lord and believe in your heart that God raised him from the dead, you will be saved.” Rom. 10:9

4. The Bible says that Jesus wept for Jerusalem. In the midst of the praise of the moment, He knew in His heart that it wouldn’t be long that these same people would turn their backs on Him, betray Him, and crucify Him. His heart broke with the reality of how much they needed a Savior.

“As he approached Jerusalem and saw the city, he wept over it, and said, “If you, even you, had only known on this day what would bring you peace–but now it is hidden from your eyes.” Luke 19:41-42

5. Palm Sunday reminds us that the reign of Christ is far greater than any the mind of man could ever conceive or plan. Man looked for someone to fight their battles in the present day world. Yet God had the ultimate plan of sending His Son to fight the final battle over death. This is the greatness of why we celebrate this week. Because of Christ’s ultimate sacrifice, we can be set free of death.

“Jesus said to her, ‘I am the resurrection and the life; he who believes in Me will live even if he dies,'”John 11:25

We have so much to be grateful for this week. The enemy knows that, and you can bet, he’s going to do everything he can to try and distract us away from the true meaning of what this Holy Week means. Don’t let him win.

In this Holy Week, may God direct our thoughts and attention towards what matters most, Jesus Christ our King…

Let’s choose to focus on worshipping our Lord, thanking Him for the gift of His sacrifice, celebrating the power of the Resurrection, and the new life found in Him alone. Grace. “Thanks be to God for His indescribable gift!” 2 Cor. 9:15

Zechariah 9:9 – Rejoice greatly, Daughter Zion! Shout, Daughter Jerusalem! See, your king comes to you, righteous and victorious, lowly and riding on a donkey, on a colt, the foal of a donkey.

John 12:12-19 – The next day the great crowd that had come for the festival heard that Jesus was on his way to Jerusalem. They took palm branches and went out to meet him, shouting, “Hosanna! ” “Blessed is he who comes in the name of the Lord!”“Blessed is the king of Israel!” Jesus found a young donkey and sat on it, as it is written: “Do not be afraid, Daughter Zion; see, your king is coming, seated on a donkey’s colt.”

Luke 19:11-44 – “Go to the village ahead of you, and as you enter it, you will find a colt tied there, which no one has ever ridden. Untie it and bring it here. If anyone asks you, ‘Why are you untying it?’ say, ‘The Lord needs it.’ ” Those who were sent ahead went and found it just as he had told them. As they were untying the colt, its owners asked them, “Why are you untying the colt?” They replied, “The Lord needs it.” They brought it to Jesus, threw their cloaks on the colt and put Jesus on it. As he went along, people spread their cloaks on the road. When he came near the place where the road goes down the Mount of Olives, the whole crowd of disciples began joyfully to praise God in loud voices for all the miracles they had seen: “Blessed is the king who comes in the name of the Lord!”“Peace in heaven and glory in the highest!”

Lord God, I give you thanks, for you are good, and your mercy is endless. Here I stand, at the start of this holy week, this week in which your church remembers Jesus’ passion and death, and I am distracted by many things. Turn my eyes now to the One who comes in your name, the one who opens the gates of righteousness, the one who answers when we call.

I bless you, Lord, for shining your light upon me, and for sending your son to us, in human frailty. To walk the road we walk. Open my eyes that I may see him coming, and may praise him with a pure heart. And may walk in the way of his suffering, and share also in his resurrection. Through Jesus Christ our Lord, who lives and reigns with you and the Holy Spirit, one God for ever and ever. Amen.

There are no upcoming events at this time.